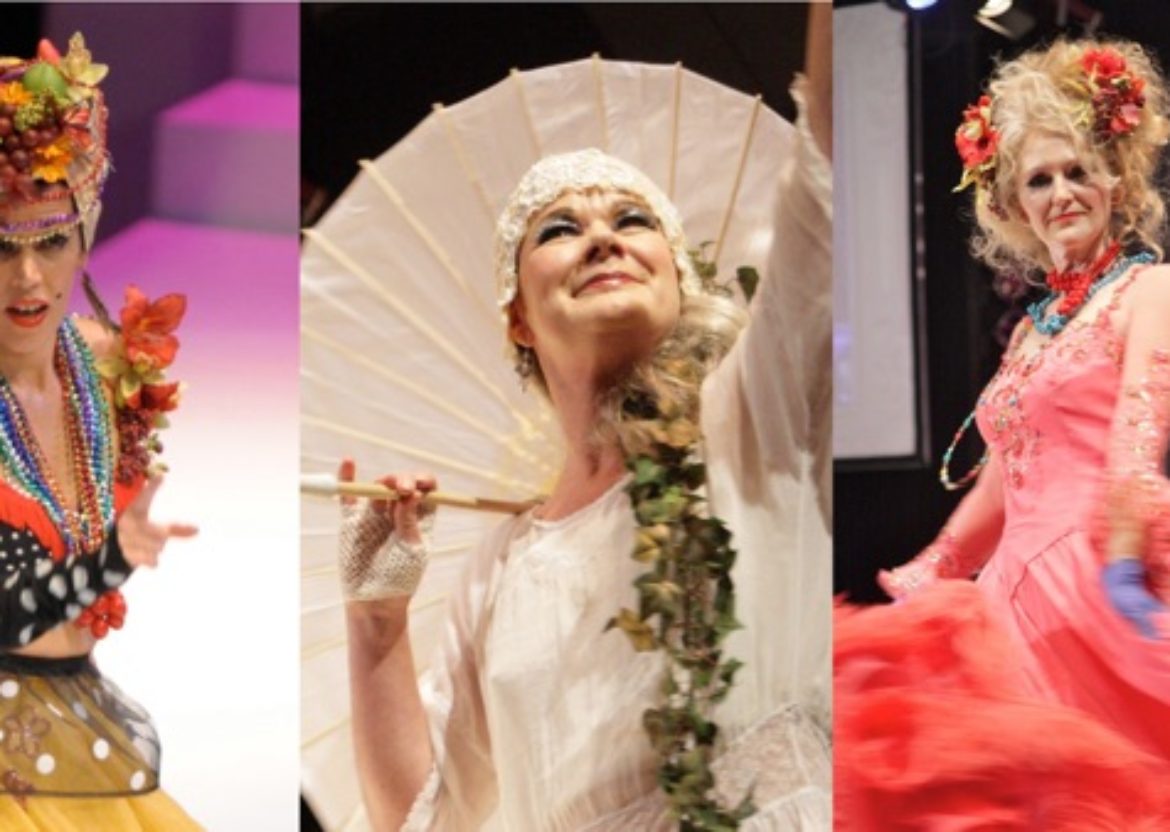 Back in 2009 as a eager, new makeup artist, I hounded Denny at the Creative Tauranga office to involve me in the makeup backstage at Tarnished Frocks and Divas at Baycourt Theatre.  ‘Divas Through The Decades’ was the third production of this bi-annual show that sees local women aged 40+ modelling revamped, retro fashion in a catwalk/music/theatre mash up.

I was blown away by how gorgeous and fit the women were – many of whom had never modelled before!  The backstage experience was filled with fast-paced changes of out-there makeup and hair and costume, with the directors even cutting chunks out of the script for the second night as the first show was way too long…and each two years the TFAD shows have gotten bolder, more ambitious, more theatrical and technology-savvy.

Here are a few images from my subsequent ‘TFAD’ experience. 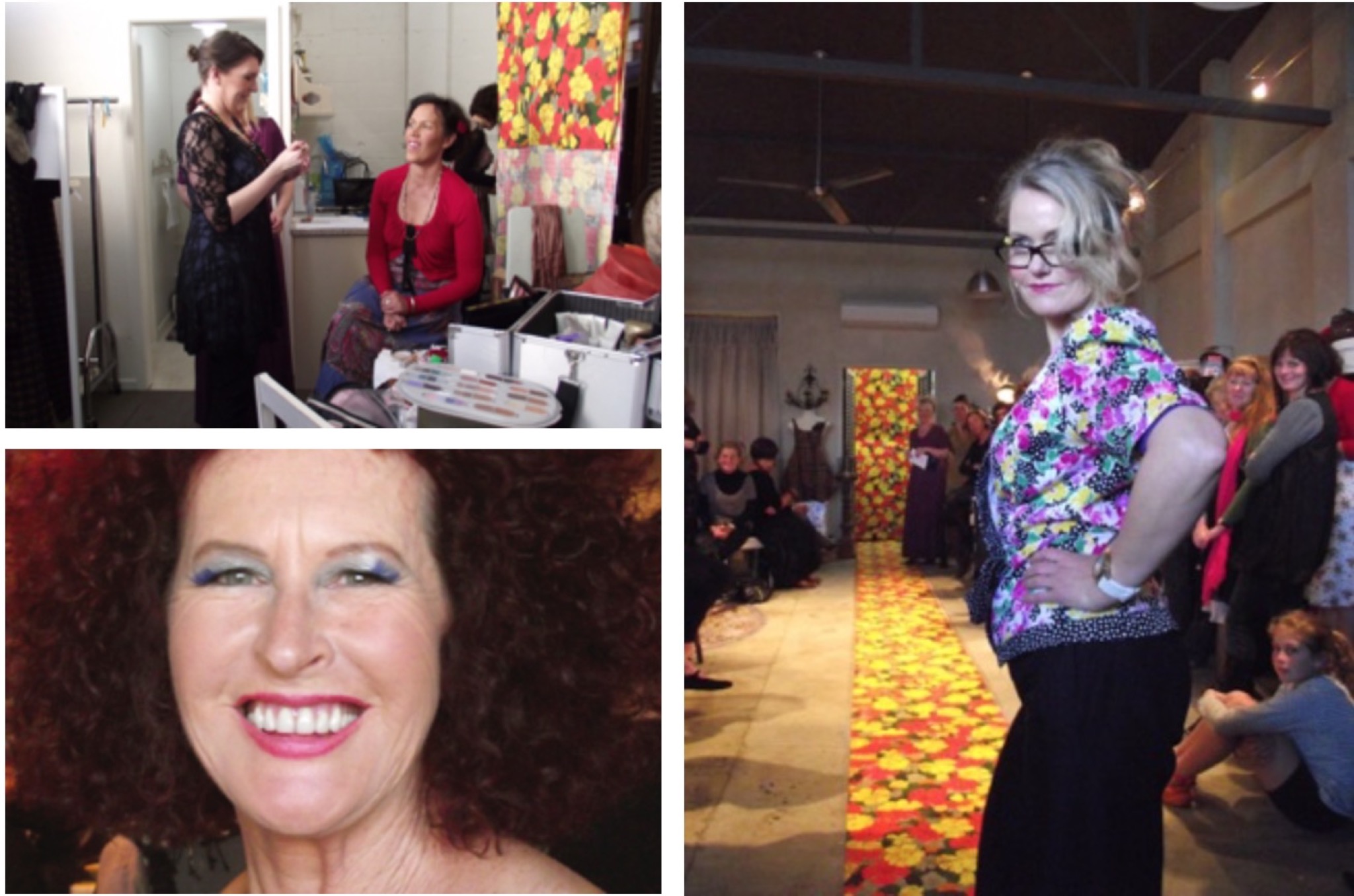 In early 2010 they held a small fundraising fashion show – Out of the Closet– at La De Da Boutique in Tauranga.  I did quick makeup and used some strange coloured plastic lashes on the models.  Hey, I was experimenting.  😉  The makeup was just a quickie to vamp up the models own makeup they were already wearing.  Here’s Leilani backstage, Gilly rocking blue lashes and Linda on the ‘runway’. 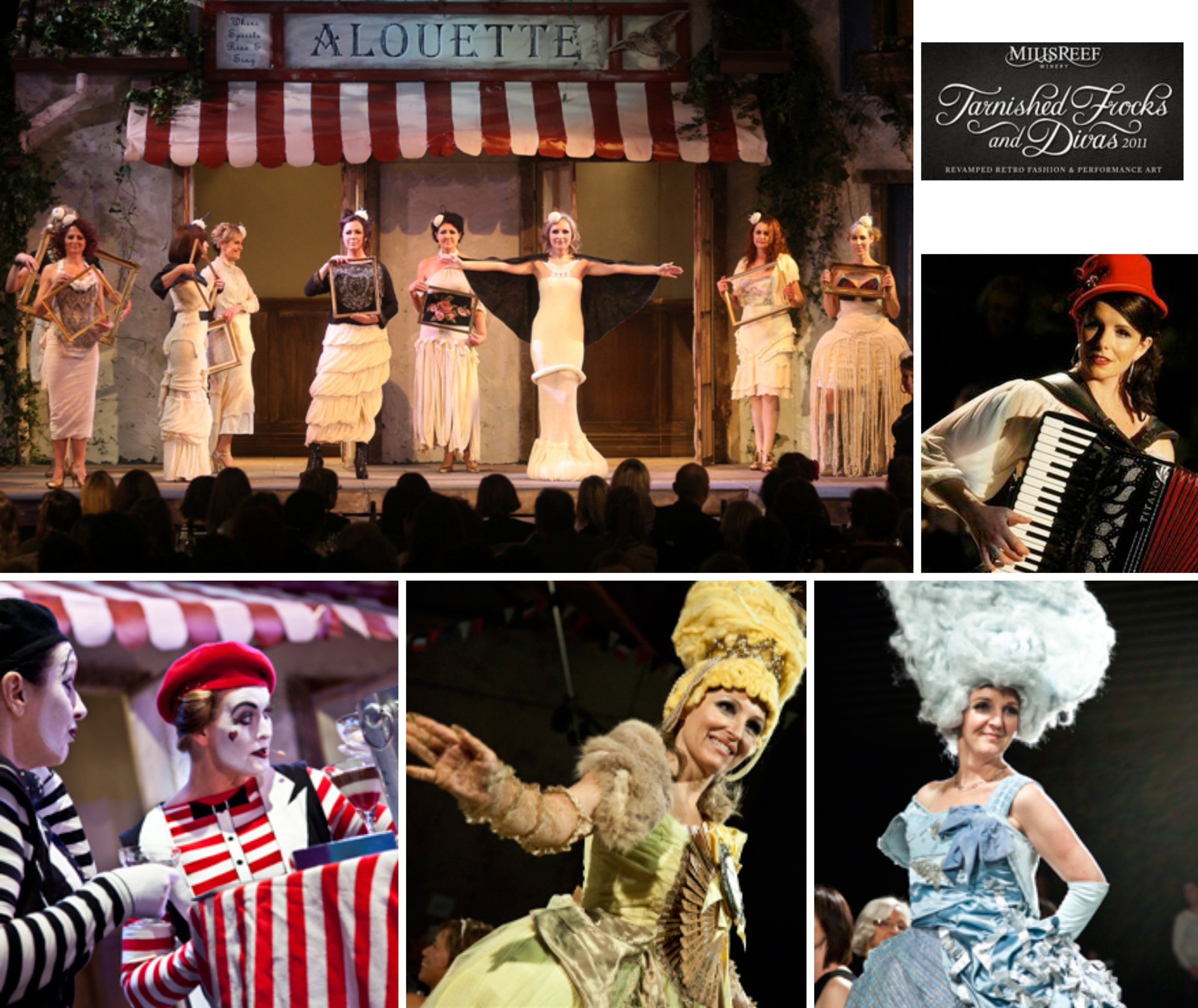 In 2011 the show was based on a 9 course (I think it was) French degustation meal at cafe ‘Alouette’.  Each model ‘walk’ was one ‘course’ and showcased the style of a particular French designer, ie, Dior in florals may have been an entree, Chanel in black and white may have been a main!

Compared to the Baycourt show, the audience was much closer to the models, as they walked around the table and chair seating in the warehouse of Mills Reef Winery and Restaurant.  As well as co-leading with makeup director Tina Neville in the damp, poorly-lit conditions of the underground wine barrel room (no natural light!), I oversaw the face painting for the French mimes.

In 2013 the show was based on a trip around the world by aeroplane – a Journey Of Discovery – with singing groups dressed as air hostesses and models walks according to the country of the unfolding story, ie. Africa, India, New Zealand etc.  I created and led a team of makeup artists and total makeup newbies and sourced the makeup product to serve about a third of the cast – all the singers, dancers and some extras.

The biggest challenge was in a 30 second change-over before the last scene: the dancers came off stage and had to re-dress in that time, during which we had to wipe off a face-paint bindi (India) and skillfully apply black lips (NZ)…in the mostly dark behind the LED screen ‘curtain’!  We ended up skipping the black lips because that is not something one can execute satisfactorily in a rushed manner! 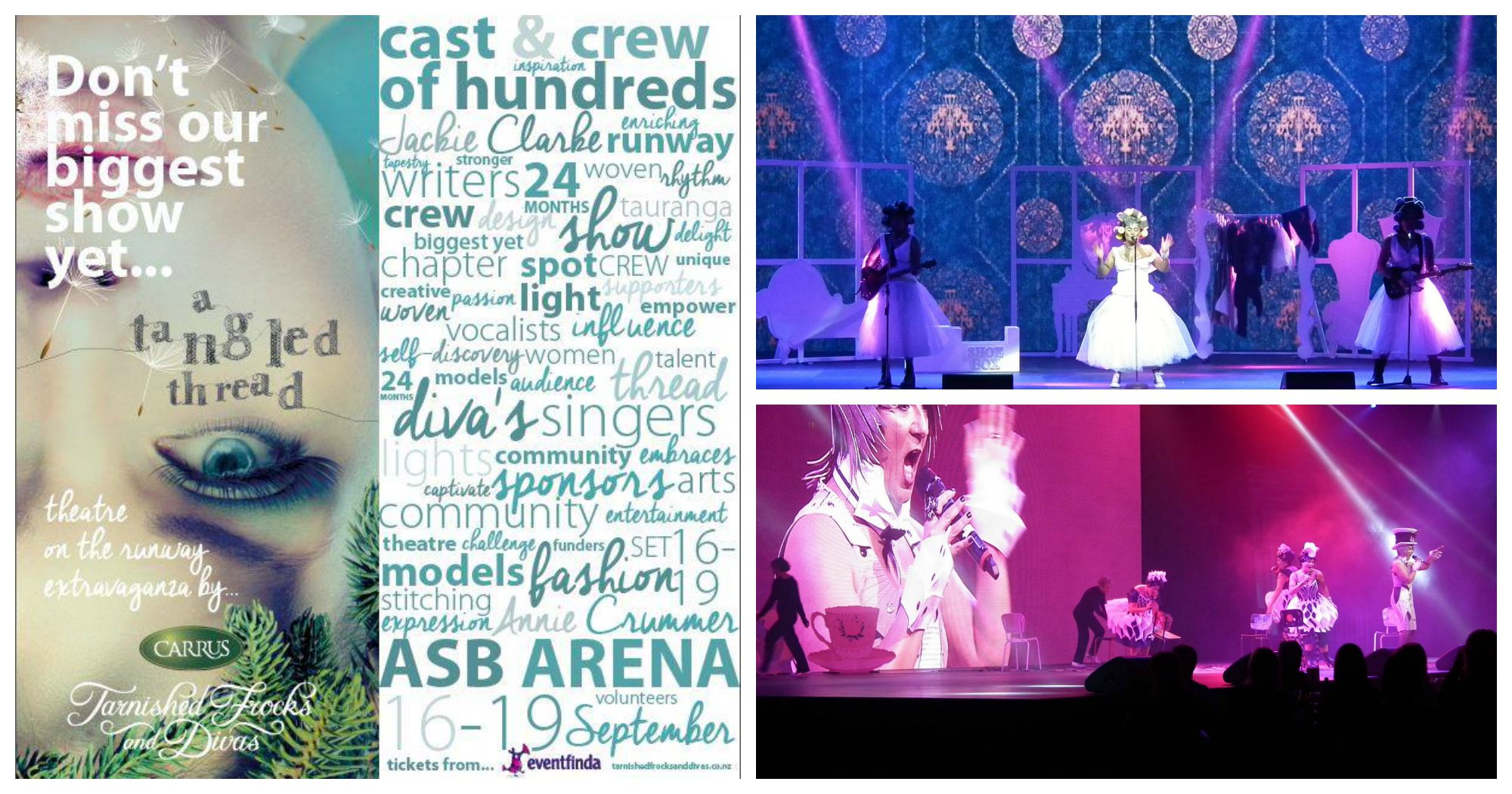 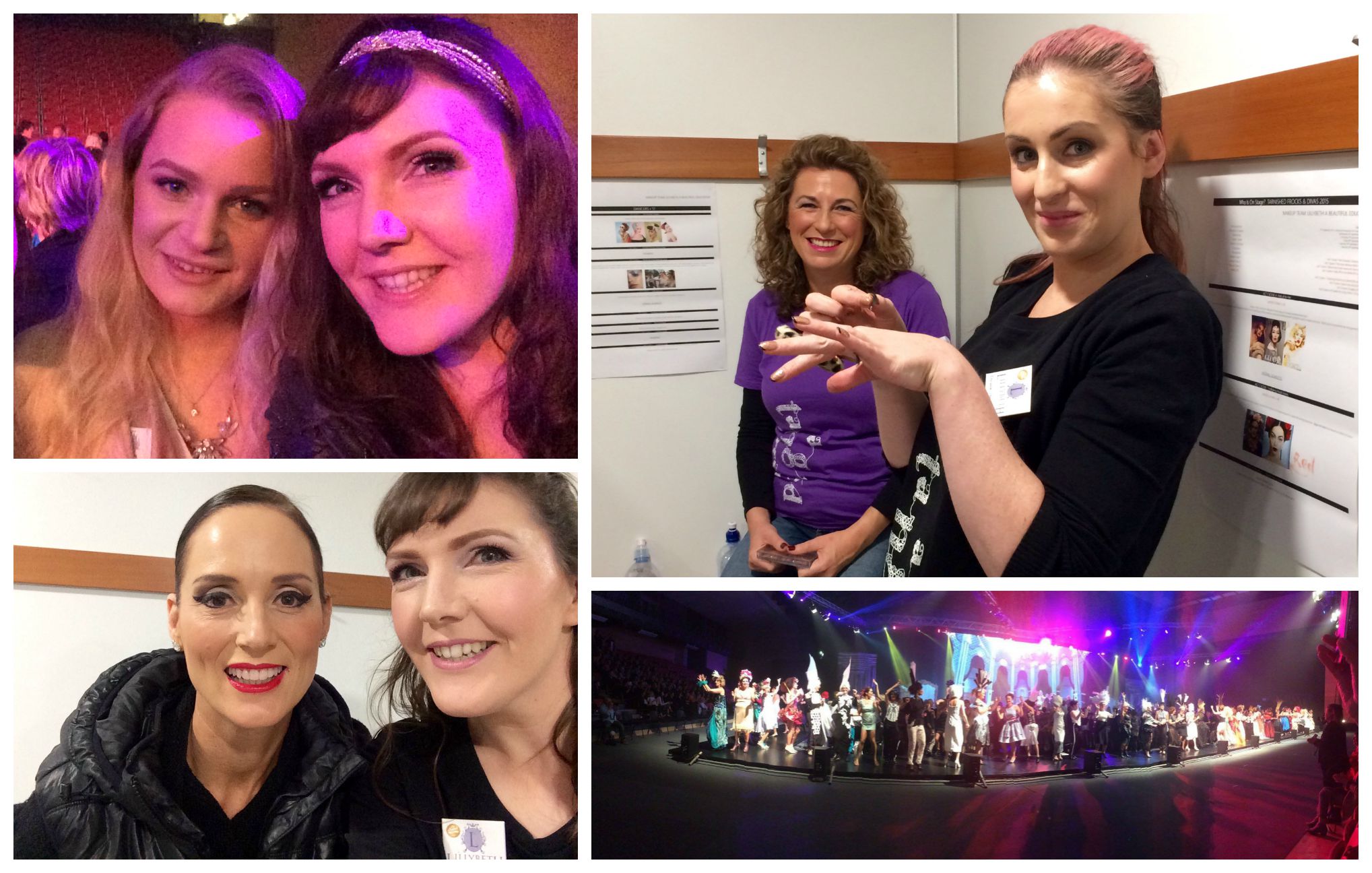 In 2015 the show was A Tangled Thread.  The costumes were incredible, dancers were on-point (wonderful volunteer choreographers who teach dance as a business) and music was dramatic.  Somehow thanks to Adoux (now ‘Ado’) hairdressing sponsors the wigs were even more diverse and perhaps taller if possible than the previous show.  Some models had to ‘limbo’ to safely get through the door frame for makeup.

Once again I created and led a team of makeup artists – one of three teams just for makeup – and worked in the same room as students from the School of Makeup Art Technology, where I trained in 2008.  We mainly used products from sponsor Bella Vi mineral makeup and my team varied between 11 volunteers and just 6, to do the same amount of work.

A mini scandal in the dressing room, and thoughts on modelling:

I remember clearly the drama when one of the models refused to wear an element of the designated makeup look…For one scene the costumes were spanish-esque with bright flowers on the head, inspired by artist Fridah Karlo.  Of course the makeup included her famous ‘mono-brow’ and for this to be seen from stage or on the big screen, like every element, we had to over-dramatise it…which meant using a dark eyeliner or brow pencil to draw on hairs between the models’ natural brows so they met in the middle.

One model did not want to wear the brows because her son was in the audience and she didn’t want him to see her ‘ugly’.  She ran out of the dressing room to get away!  But because it was ‘part of the look’ and every one else was wearing it, I felt it really should be applied.  Reassured by the rest of the makeup team thinking the same way, I followed her to backstage, right up to the place she was waiting to walk on.  She avoided me, duck-diving to get away and if I’d reached out to apply the makeup I think she would have whacked me!

In the fashion world, models don’t get to choose what they are given to wear.  Their purpose is to model and represent the choices of the designers and artists, not their own preferences.

Unlike the common misconception, It’s not easy being a model!  But in return for the glamour and applause on stage, models need to understand their purpose and make the personal concessions required of them for the good of the show.  We all have to. 🙂

Here’s some of the makeup inspiration for TFAD 2015: 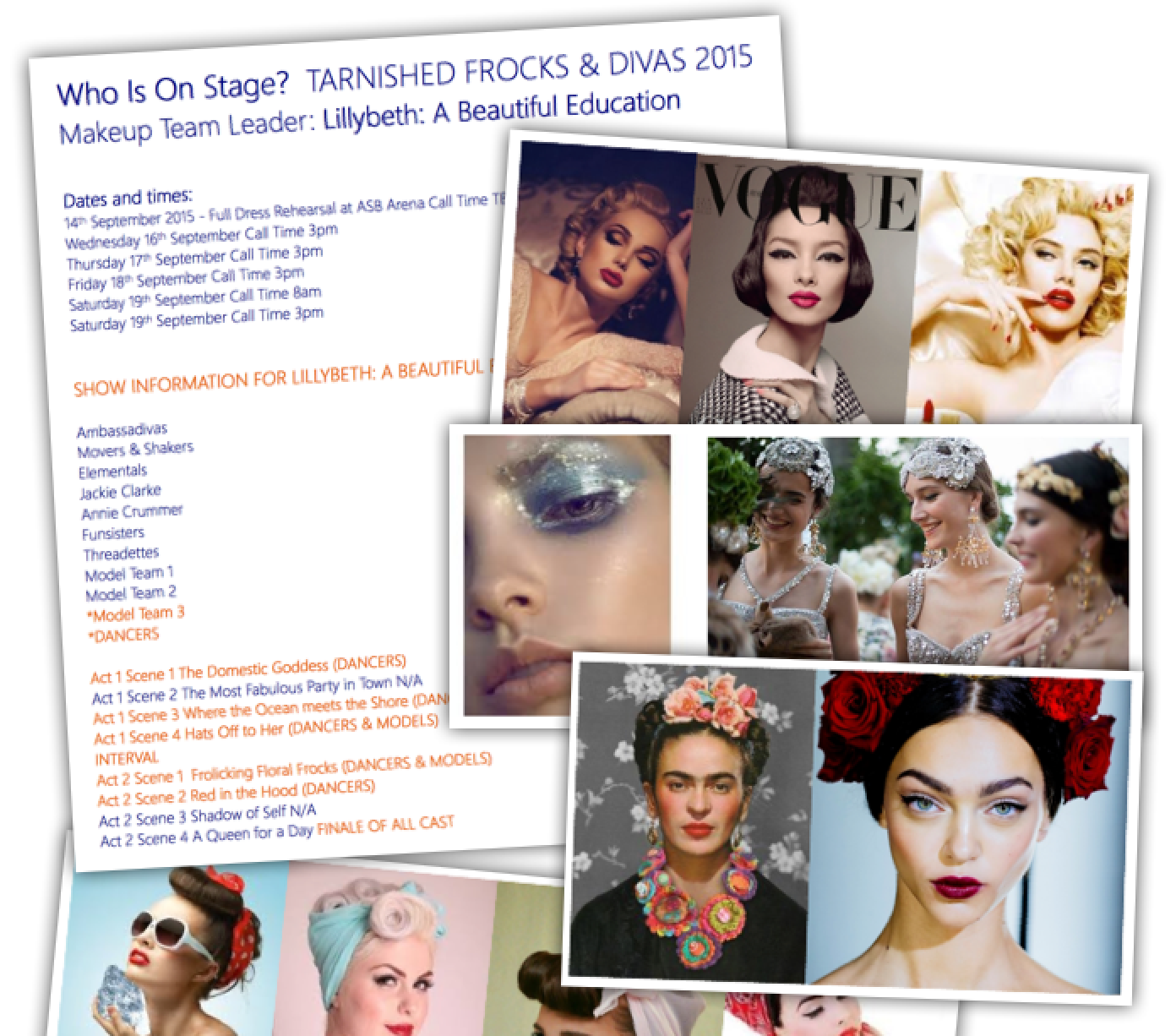 This year I’m leading a makeup team, once again, for Tarnished Frocks and Divas’ 2017 show,‘Zoetica’.  I don’t know the story or makeup looks yet but I couldn’t post them here anyway – everything pre-show is top secret!

If you want backstage photos of our team as the show unfolds (not the cast sorry, so as not to ruin any secrets!), follow our facebook page and subscribe to my monthly Lillybeth letter – link to the right.

previous postBrides, I Wrote You A Book!

next postWho Will Be My Makeup Artist? 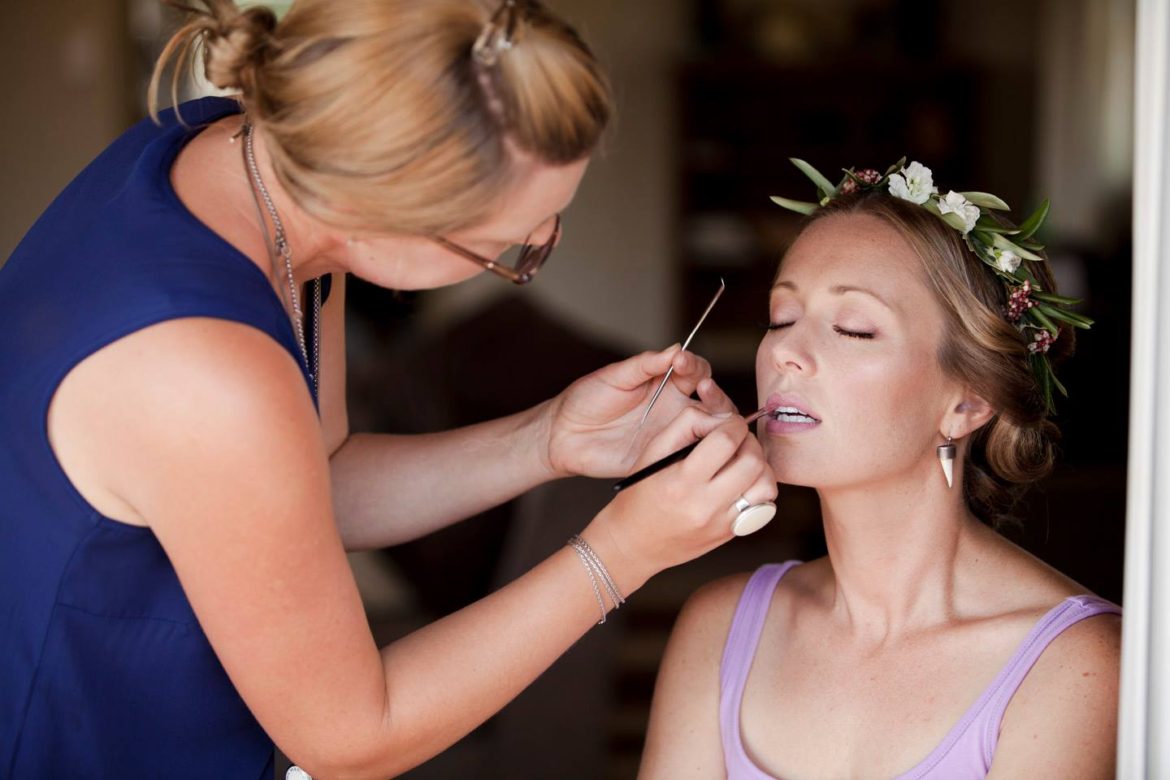 Who Will Be My Makeup Artist?

I never say I’m booked for your makeup myself, then send someone else on the day. Unlike some business horror stories you might have heard, if you book one... 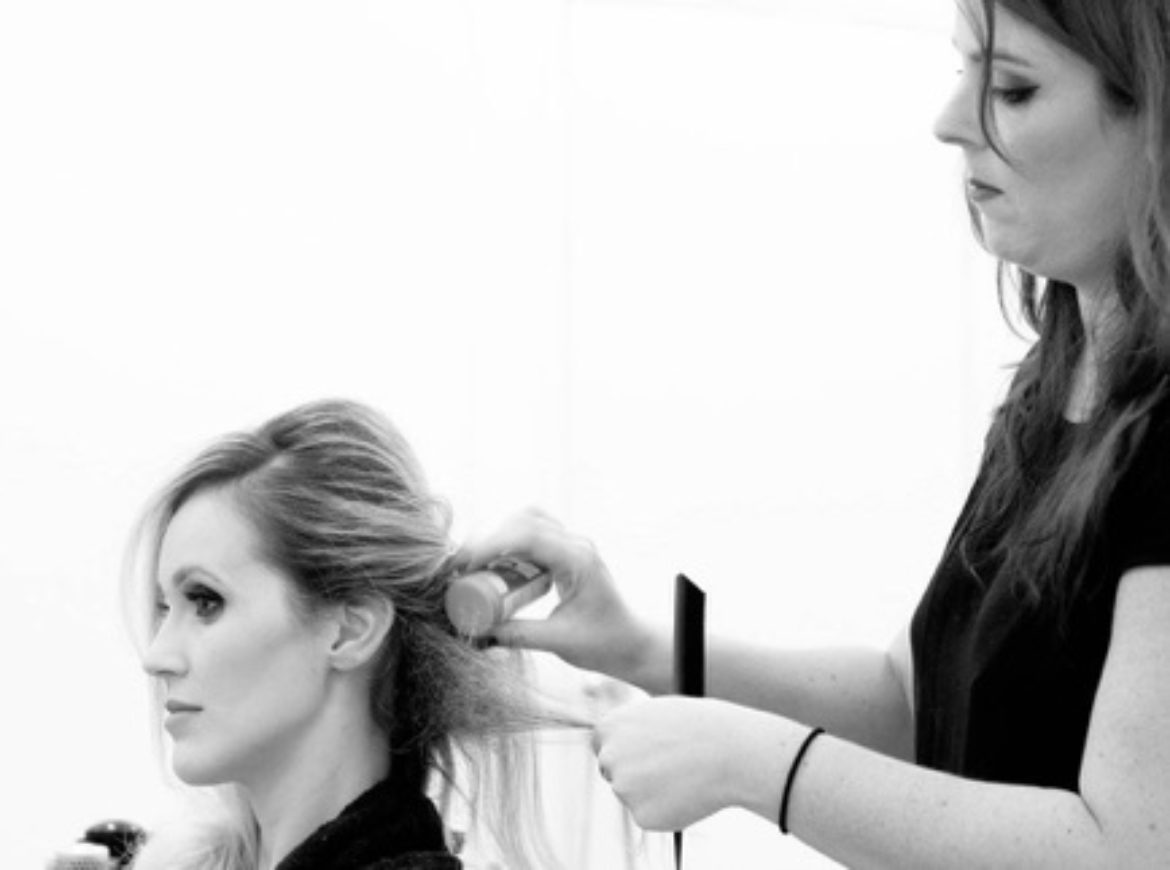 It used to make me sad when brides booked their makeup elsewhere because they want to book hair and makeup together. I totally get it. I know it’s... 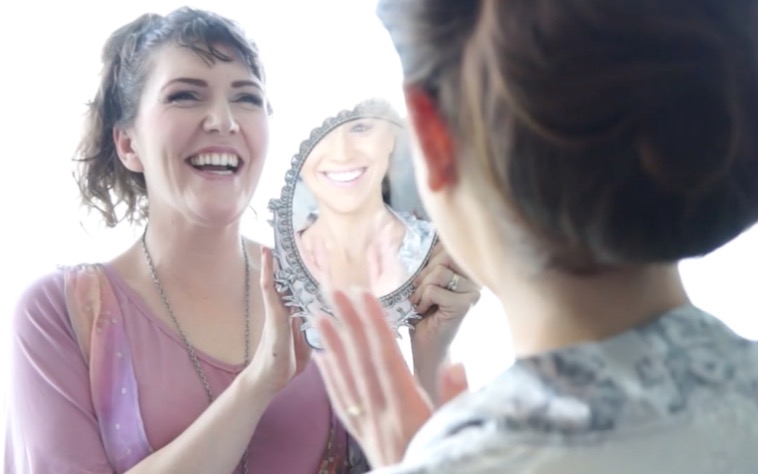 Copyright Lillybeth Makeup 2017
Back to Top